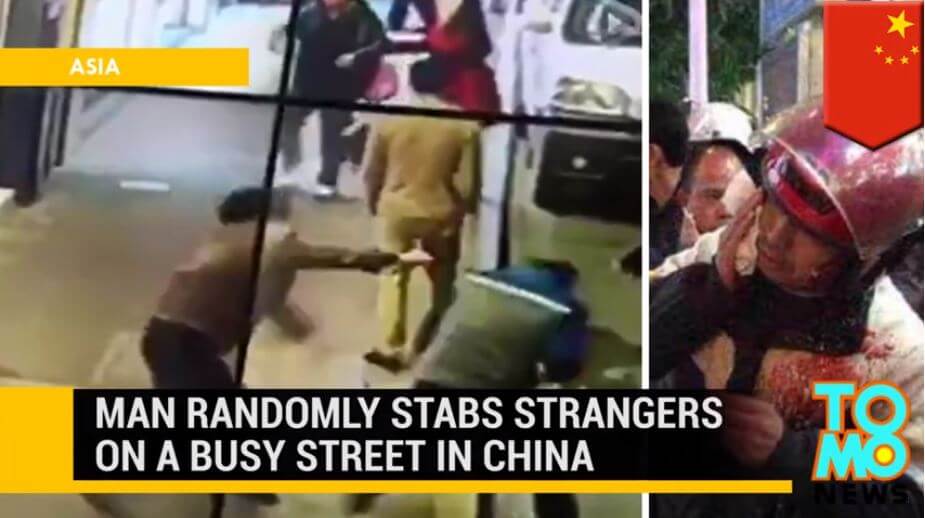 An important lesson about knife defense

In today’s article, we discuss about a deranged individual trying to stab random people. As you’ll see, it’s important to take knife defense seriously. That said, unless you know how, it’s hard to defend against a knife.

Indeed, edged weapons are very hard to defend against and very high lethality.

It means that this combination isn’t in your favor since a knife-wielding attacker can badly injure or even kill you, if you don’t know how to protect from him.

Here’s a great example – a man just stabs whomever he wants and he’s even almost going for small children, and people are having a hard time stopping him from doing so.

Its unbelievably absurd, victims don’t know what to do and are defenseless, while other people try to counter attack with some improvised strikes and moves.

Some of them are simply walking by, too scared to interfere! And another man walking on the sidewalk, dodges the knife stab at the last second. What a close call that was!

As you can see, knife attacks are incredibly dangerous – not only do they produce some of the worst injuries imaginable, but they are also very hard to counter.

Many of knife attacks are ambushes, sudden and violent stabbings that are extremely difficult for an untrained person to avoid.

Would you take your chances and remain defenseless?

At least, I hope so.

Certainly, there aren’t many people with knives roaming the streets and stabbing pedestrians for no reason, like you have seen in the video.

But, just one such encounter is enough to leave you dead or crippled for life.

To become competent at knife defense, you need to be prepared

To make sure that the same doesn’t happen to you one day, I invite you to watch our Knife Defense video on how to defend yourself from all sorts of different knife attacks.

We’ve put together a complete instructional and downloadable video on the subject of knife defense, so that you can watch it whenever you want to master all the knife defense techniques and concepts.

Don’t be a helpless victim – learn to protect yourself!