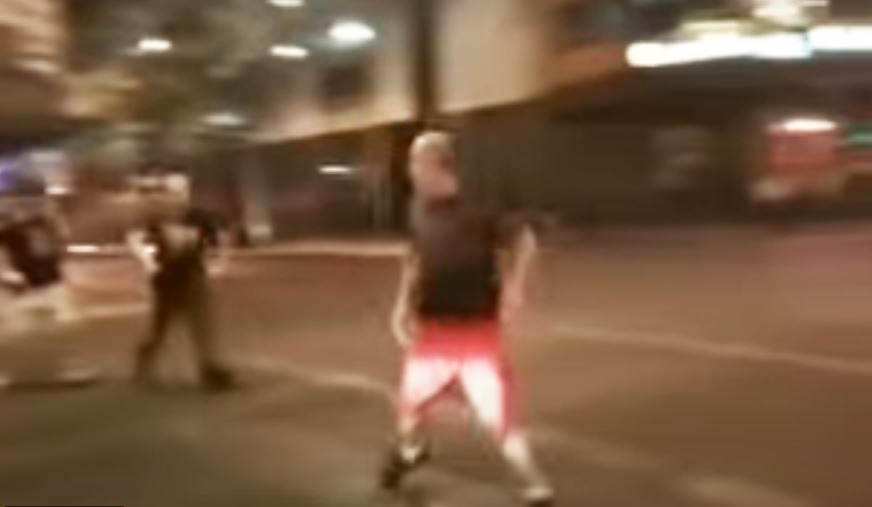 Truly, this is one of the craziest street fights I’ve ever seen on video. In the clip, a man is chased down by multiple attackers and thrown to the ground. It’s literally a street fight of epic proportions!

Although we don’t know what triggered the fight by only watching the clip, we can see that the man with the red shorts is trying to get away from multiple people (2 guys and 2 girls).

The guy with the red shorts, runs away from his assailants but trips near a sidewalk and trashcan and falls to the ground. He tries to fight back, but he’s quickly swamped by the four assailants.

He’s getting punched and kicked several times to the body.

Then, his friend suddenly appears from nowhere and drives them away with furious punches and kicks. Being a good fighter fast on your feet can make all the difference!

He did an excellent job!

This is what good fighting skills can do:

As you can see, it’s a crazy, hectic street fight where two men successfully fended off multiple attackers and even gave them a pretty good retaliation fight.

It started off as a typical scenario where several guys overwhelm a single person to beat him to a pulp… But everything changed when the man’s friend came running to the rescue and managed to beat the odds by fighting his opponents fast and furiously.

He arrived just in time, too or else that could have been really dangerous for his buddy.

This was not a robbery or a planned ambush by multiple criminals, just a few guys with short tempers and far too much booze in their blood.

Always avoid fighting if you can

Engaging multiple attackers is never a good idea, even if they are just drunk partygoers. But a confident fighter with strong self-defense skills against multiple attackers, can successfully deal with such a situation, as demonstrated in the clip.

The moral of the story is that, if you fight back hard and fast, there is a good chance your attacker (or attackers), will get discouraged and retreat.

Nobody likes a tough opponent, and many people who get into fights for ego-based reasons don’t enjoy fighting at all when it’s they who get hurt.

But keep in mind that not everyone has the same pain threshold and some people can be very tough to beat. It’s not because you’re fighting back with intensity, that you’ll necessary win the fight.

Furthermore, as seen in the clip, if you don’t have good self-defense footwork skills, you won’t make it far in a street fight.

Those two men most likely had done something wrong that got them into that crazy mess in the first place, but thanks to quick thinking and skilled fighting it worked out well for them in the end.

In conclusion, I think it’s fair to say that this was a street fight of epic proportions!

Related: How to Deal with an Invitation to Fight

Take care and always be on the lookout.