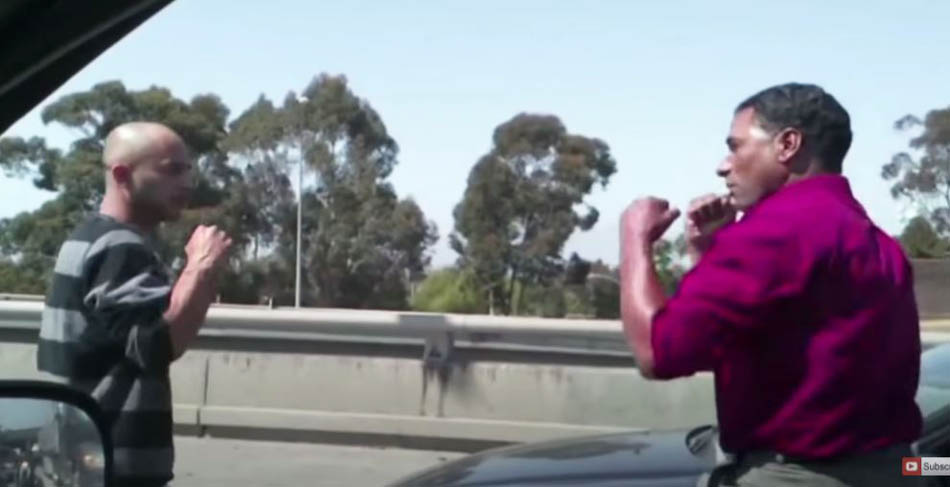 In this article, you’ll see an impressive video of someone fighting in the streets against multiple opponents. You’ll quickly see how this is a bad case of road rage.

When someone tells you to “choose your battles carefully”, you should definitely take this advice to heart and follow it.

In fact, I’d go as far as to say that you should avoid battles at all times, unless your life and health are clearly at stake!

You never know, that short and skinny guy you picked a fight with might just kick your butt and cripple you!

Or worse, he might have bigger and stronger friends nearby…

Did that man really have to fight?

I would argue that the most sensible thing to do in that situation was to defuse the conflict before it turned into a two-on-one brawl.

Had that guy not been an angry, overconfident bully with a history of road rage, he would have seen that the odds weren’t in his favor and haven’t acted so stupidly.

But he just had to swing his fists, didn’t he?

Learn from that man’s mistake and use self-defense ONLY for defense purposes.

So, here’s a key element to learn from this street fight:

Don’t go straight into a fight – EVER!

The victim obviously had some understanding of the basics of combat.

However, this is never a good excuse to become confrontational and try to take on two people at once – whom, might we add, he had previously cut off in traffic!

The result was quite predictable…

The man got beaten to a pulp in the presence of many onlookers.

Of course, they should have interfered on his behalf, multiple kicks to the head are too severe punishment for cutting someone off in traffic, but that guy made a serious mistake right away: he picked a fight with the people he pissed off!

Even if you are a master of self-defense, you should never do that

In fact, if you were, then you wouldn’t even consider it, because you would know that the easiest way to win a fight is to avoid it!

And… That is because anything can happen in a street fight.

That was a very instructive video: it tells you how NOT to behave during a conflict situation.

P.S. Also, if you aren’t flexible and fast enough to kick your opponent in the chest and bring him down… don’t even try it!

Learn how to protect yourself against multiple attackers with this self-defense video.